Kamata, and the apaato vs. mansion puzzle.

The area around JR Kamata Station and Keikyu-Kamata Station 京急蒲田駅 is a bit tired, a bit rough around the edges. I’ve only been once or twice, but the unique character has stuck with me. The only photo I took is from a side street that was surprisingly poorly-lit, considering how close we were to a JR station.

Later, after walking east for 15 minutes along the Nomigawa, a saw this orange apāto アパート (map). I took a couple of pictures: 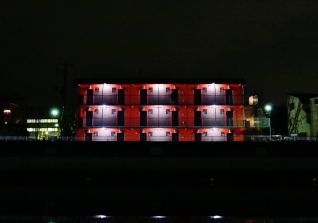 Apaato is a katakana word based on the English ‘apart’ (like ‘apartment’), but the meaning is a bit different from ‘apartment’ in the United States. The Japanese word マンシオン, or manshion, is, in many cases, a more appropriate equivalent to the American ‘apartment’.  The main difference between an apaato and a manshion is that an apaato is generally of lower quality and price compared to a manshion.

Here is a Google image search for apaato アパート. Some features indicative of an apaato are an external entrance, with stairs to a second floor, giving the general appearance of an American ‘motel’.

Here is a classic, rusting apaato in Kunitachi, Tokyo, and in Ikebukuro: 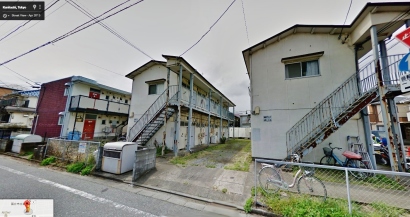 Here is a Google image search for マンシオン manshon / mansion. These buildings are larger and look newer and more expensive. This may have either interior or exterior hallways.

A mansion next to an apaato in Chofu, Tokyo: 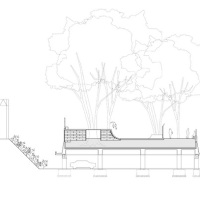 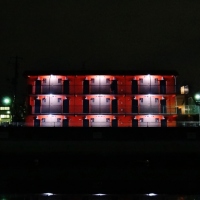