From what I recall, the plot of the film is this: a woman from Tokyo travels to snowy Kanazawa to find her missing husband. The woman, played by Yoshiko Kuga 久我 美子, plays the role of detective in a film noir, traveling to far-flung villages, interviewing coworkers and acquaintances, and uncovering long-lost secrets (perhaps the better comparison is to Jimmy Stewart’s character in Vertigo). It’s a good, atmospheric film, rich with flavor of the isolated Japan Sea coast of Honshu; there also are references, subtle and otherwise, to the American Occupation of Japan. [The film was remade in 2009; see the Japan Times review.]

A few interesting settings from the film:

(1) A panorama with Kanazawa Castle 金沢城 at right; the old Kanazawa steetcar can be seen downhill from Ishikawa bridge 石川橋 (map / streetview):

The same scene from today, and from on top of Ishikawa bridge: 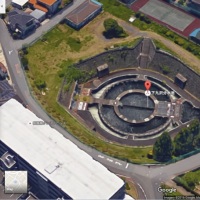 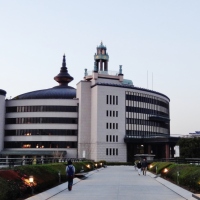 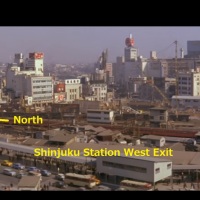 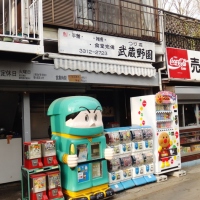